Just a Little Bit - the final chapters are ready! 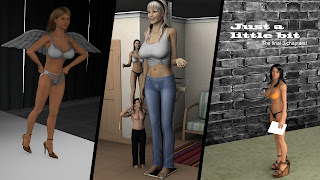 Buy it NOW!
It took me a very long while, but this story is finally complete.

I've been working on this story, on and off, since early 2009 - which is both insane and incredible.
7 years later, and it is, at long last, complete. I can't tell you how big of a relief that is...

In case you've never heard of this story before, here's my best attempt at a tl;dr version:
It's basically a story with over a 1000 images, about a size transfer device which gets out of control. Lots of characters shrink and grow, hilarity (and nakedness) ensues.
The first 800 images were (and still are) free, and the nearly 400 following images are for sale, divided into 6 chapters:

The first 3 were initially sold separately, until I replaced them with a bundle for all 3, at a 20% discount.
Keeping with that tradition, I've added chapters 4-6 to the store to be sold separately, and have also included a bundle for all three of them, again at a 20% discount.
And if you want to buy all 6 chapters, there's an option which gives you an additional 10% off (on top of the previous discounts).

It's all available here:
Buy it NOW!

I hope you like it!
Posted by DangerousDave at 9:04 AM 4 comments:

DangerousDave
A growth and shrinking fan and creator